The idea of measuring the candidate experience is starting to become more and more highlighted in the world of human resource management. If you have not started to measure your candidate experience by gathering feedback in the recruitment process yet, you might wonder if it is worth doing. Can the benefits actually exceed the costs of doing it? The answer is: yes!. This case study of Uppsala Municipality will show an example of how it can be executed.

Read more about them below

Clarified and simplified their application forms

When asking the candidates a simple question as ‘What is your overall impression of the recruiting?’ at the beginning of 2019, Uppsala Municipality presented a score that was way below the benchmark on a scale of 0-10. The result gives a signal that there was room for improvement. Soon after they started measuring the candidate experience they identified a pattern in the feedback from their candidates. Many of their candidates seem to think that Uppsala Municipality’s application forms could be improved.

Using this data, the organization started to clarify and simplify the application forms which according to the measurements has been successfully managed. Counting from January 2019 until end of the year, about 15 800 forms have been sent out to their candidates. Out of these candidates, 50% has answered and contributed with feedback.

Dissatisfied Candidates in the Interview Process Were Spotted

Interviewing candidates is a part of Uppsala Municipality’s recruitment process. Since an interview, in most cases, is both the candidate’s and the organization’s first real-life interaction with each other, it is an important part of the process. Candidates within the field of locum tenens (temporary substitute) form one of the largest sections of whom Uppsala Municipality has been focusing on in their recruitment. Therefore they have been focusing on the development of their interviewing skills in that field which has shown great results.

According to their measurements of the candidate experience we can see that they have a continuous improvement of their Candidate Net Promoter Score (CNPS) in this section. During the latest 90 day period, the Candidate Net Promoter Score of the candidates involved in the recruitment of locum tenens (temporary substitute) has been improved with 35% compared to the 90 day period before that.

Besides that specific improvement, Uppsala Municipality has through their work with the development of their interviewing skills created a high Candidate Net Promoter Score compared to the general benchmark for organizations in the public sector.

Do you remember that Uppsala Municipality scored below the benchmark when asking about the candidates’ overall impression of the recruitment process in the beginning of 2019? Guess what! About 11 months later they have gone from being under the benchmark to scoring 8,28 on a scale of 0-10 which is above the benchmark.

Not only that! During October 2019, Uppsala Municipality’s Candidate Net Promoter landed on +69 on the scale ranging from -100 to 100. This result ranks them among the top 15% in the public sector during this time period. A result that would have been hard to achieve if they had not been acting in a correct way when handling their gathered data.

Now, you have gotten real life proof of how the measurement of the candidate experience and ability to make data driven decisions actually have the power to improve your recruitment process. But how did they make it possible? Let’s move forward from the numbers and focus on Uppsala Municipality’s reflections and recipe for success.

3 benefits of measuring the candidate experience – according to Uppsala Municipality

Collect feedback → Continuous follow ups → Get insights → Make data-driven decisions By collecting real time candidate experience feedback, Uppsala Municipality is able to follow up on problems and get quick insights about the perception of their candidates. Due to the easy access to the data and a quick way of getting insights they are then able to quickly make beneficial decisions based on the data they have gathered. 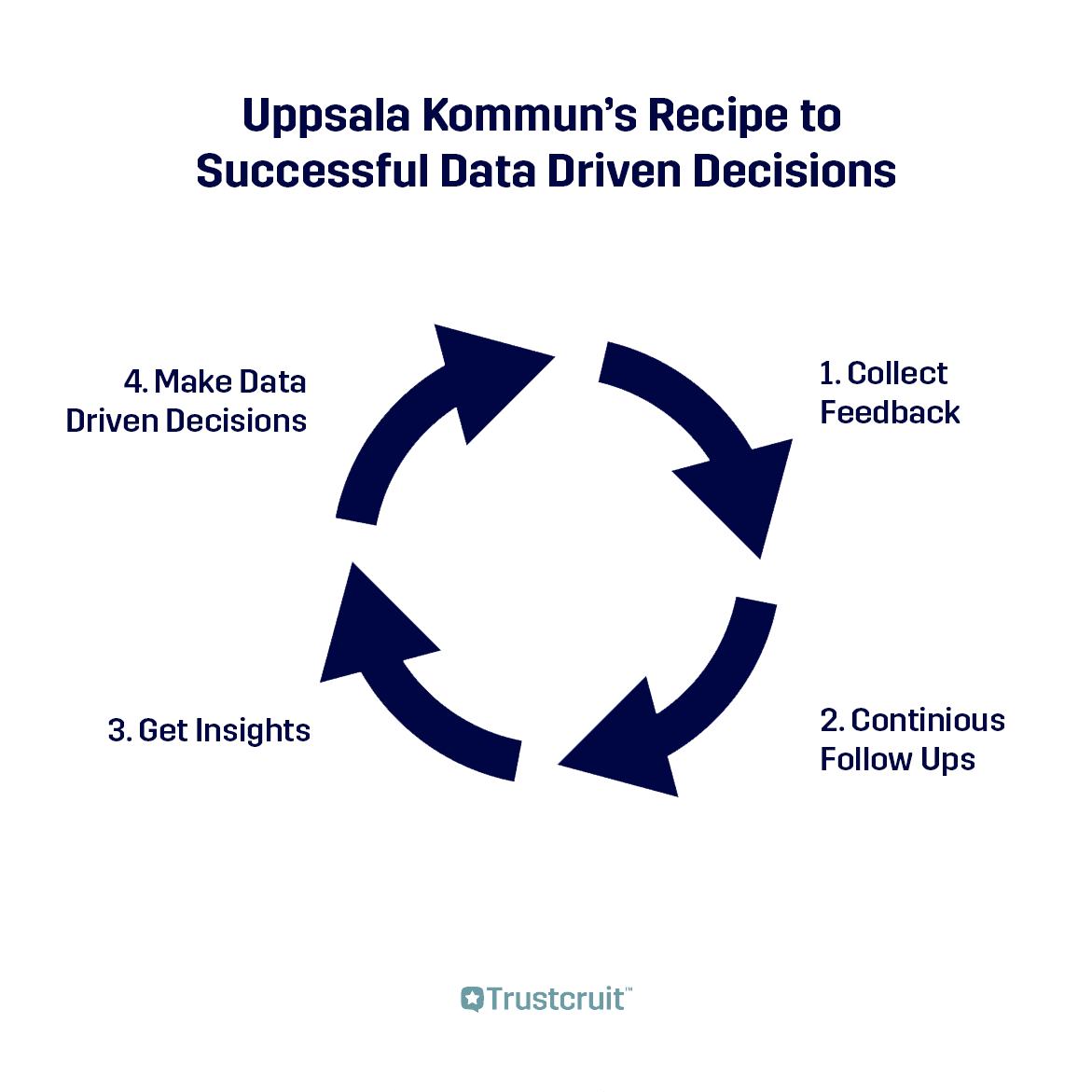 Besides the actual steps that guide the organization towards a data driven decision making process, they value the involvement of both managers and all employees very much. Involving human resources of the company in this process is explained to be of high importance in the strategic skills supply. However, this involvement can take form in different ways. One way that they do it is by teaching their employees about this process and way of working in their recruitment education.

Learnings about the Candidate Experience for Uppsala Municipality

“Trustcruit has helped us in a hands-on way to open our eyes for the candidate experience and how it affects our attractiveness as an employer.”

Measuring the candidate experience and creating an organization that value the feedback from candidates can make huge improvements in the recruitment process but also in the overall success of a company. As shown in this case study, Uppsala Municipality climbed all the way from scoring under the average benchmark to performing much better than the average organization in the public sector. By collecting feedback and having the courage to make decisions based on it, all organizations have the ability to start their journey towards a data driven organization.