higher response rate on ‘hired’ survey than others

AMBOSS is an online learning and clinical decision support tool used by more than a million doctors and students in over 180 countries.

As for AMBOSS and many other organizations, it’s hard to identify areas of improvement within their recruitment process when not knowing what for example a candidate would prefer. AMBOSS understood that this was an issue and that candidate input was needed.

To address the issue they started to manually collect candidate feedback including Candidate NPS using a general survey platform.

However, this caused a lot of extra work as candidates had to be manually imported, and later manually removed from the system to not break any GDPR regulations. On top of this, it was hard to analyze the collected feedback. For example, it was only possible to see their current Candidate NPS and not track this important key metric over time.

One metric AMBOSS could measure properly was time-to-hire through their ATS, Workable. They did notice that the number was on average 60 days and understood that they performed poorly on this. A poor time-to-hire can result in candidates dropping off or them accepting offers at other organizations. Unaware of how to improve this number meant they were stuck in a dead zone.

With the lack of proper data and feedback, the talent team at AMBOSS couldn’t measure important KPIs or set goals for these. This meant that they didn’t have a foundation to present their performance to the leadership team at AMBOSS.

Collecting data and feedback was rather new for the talent team at AMBOSS. With help from the Trustcruit team, they get the opportunity to brainstorm strategies and solutions with experts who have insights from a broad range of candidate experiences. And also help to understand how and when they should collect feedback.

I appreciate getting input from the team at Trustcruit, brainstorm and get an expert’s view on candidate feedback

To help resolve the issues the talent team at AMBOSS faced, they started to continuously and automatically collect candidate feedback through Trustcruit surveys. Asking candidates for feedback who’ve either been rejected after being to a job interview with them or 5 days after a candidate has been hired.

By automating the process of collecting feedback, the talent team can now focus more on what’s actually important – their candidates. Candidates who’ve been going through their hiring processes are automatically removed from the Trustcruit system, which means that their previous privacy concerns regarding GDPR are gone with Trustcruit.

Now when feedback is not only automatically collected but also collected at scale it was important to break down the feedback. With help from tags existing in their ATS, Workable, AMBOSS can easily filter and segment feedback in Trustcruit to target their specific challenges.

One way AMBOSS takes advantage of this is by segmenting their different departments;

AMBOSS also segments their feedback into quartiles to make it more digestible for each team – presenting Candidate NPS as Q1, Q2, and so on. The format has shown to be very useful when presenting feedback for senior management as it gives a clear and quick snapshot of current performance. 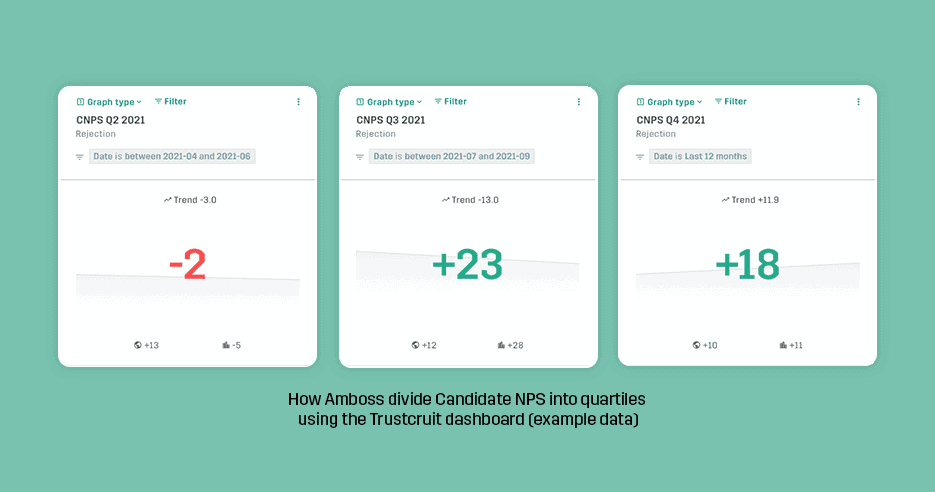 Some teams at AMBOSS take filtering and segmenting to a new level by looking at feedback for individual roles as e.g. backend engineer or product manager. This allows them to pinpoint where improvements or modifications to each specific hiring process might need to be addressed.

By asking rejected and newly hired candidates for feedback, AMBOSS gets an overall picture from candidates who’ve gone all the way from applying for a job to having been to interviews, and later rejected or hired – in other words, they get a full picture of their candidate journey. Thanks to being provided the full picture, AMBOSS now got confirmation that their long time-to-hire affected their candidate experience negatively.

The confirmation made it an easy choice to start improving this with support from collected feedback. Therefore decreasing time-to-hire became a company-wide goal, which gave results as time-to-hire went down from 60 to 30 days. 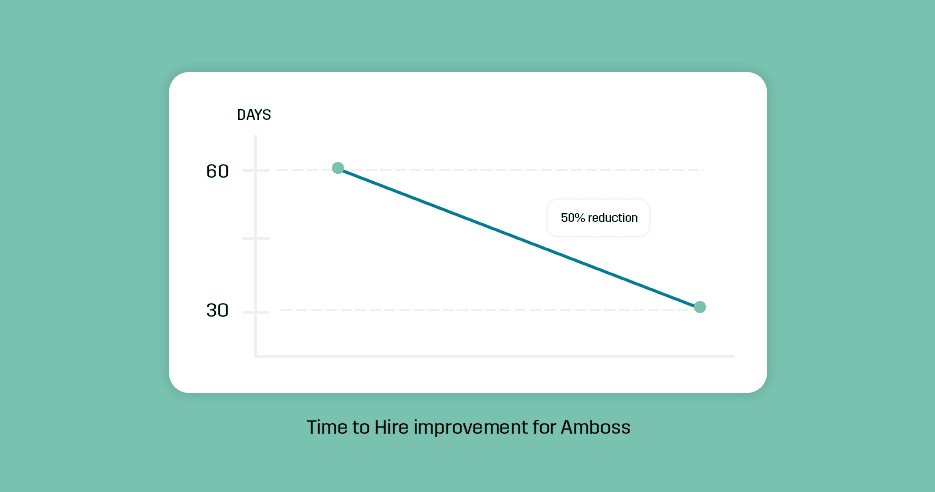 Another example of how they benefit from feedback is how they are able to follow their Candidate NPS over time, which enables them to follow trends to see how they improve but also follow downward going trends. A massive improvement compared to only viewing current Candidate NPS in their previously used general survey tool.

Segmenting feedback on department level also seemed to be successful as AMBOSS now has detected how each department faces different challenges, and can with this data adapt how they support hiring teams across the organization.

One insight from segmenting feedback was that some people in their engineering hiring team weren’t trained enough for this type of recruiting. The people received training and the issues were solved.

But maybe most valuable for AMBOSS is their strategy to present feedback and insights to their leadership team, which enables people who drive change to understand the importance of delivering a great candidate experience. Their Candidate NPS is now tracked and shared during the bi-weekly decision-makers meeting.

This helps to shed light on recruiting and make it a more prioritized resource as the leadership team now understands that positive candidate experiences equal a more effective organization.